How Japanese broadcasters are uniting to compete in OTT

A new dawn for collaboration in the streaming war

TVer – an unfamiliar brand to many, is a popular catch-up AVOD service in Japan whose success has proven alliances between competing broadcasters can work. With steady growth to over 13 million monthly users in four years, it has successfully overcome complex operational and anti-trust arrangements to now mount a realistic challenge to YouTube, Amazon and Netflix’s dominance.

Run as an online catch-up service (on web portal and apps) of popular TV programmes after their initial airing, the programmes are available for seven days. Around 200 titles are viewable at any one time with the newest episodes uploaded every week, with local drama and comedy being the top performers. Each broadcaster controls which titles to make available every quarter including occasional live streams. Monetised through targeted pre-, mid- and post-rolls, each broadcaster has their own rate card and ad server, only selling their own inventory. Ads are un-skippable and command a substantially higher CPM compared to Television CPMs. 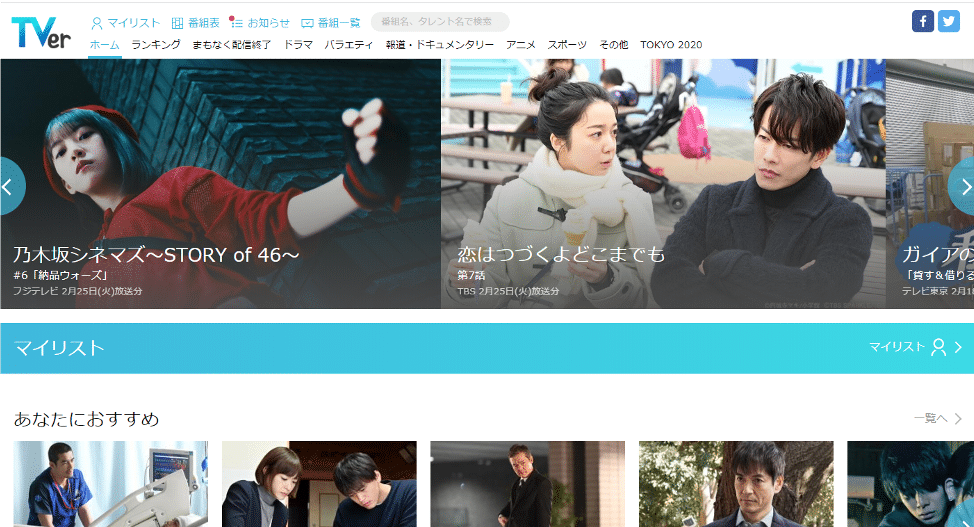 
Japan, as a market is approximately twice the size of the UK in most aspects with a relatively modern infrastructure and high penetration rate for broadband as well as smartphones (see diagram below for a demographic comparison of the two). Overall population is declining slightly, whilst the older population groups are increasing in size.

Free-to-air broadcasting is the dominant form of distribution, where Satellite & Cable have less than 20% of uptake in the market. It is led by four dominant commercial channels (TBS, NTV, FujiTV, TV Asahi) akin to ITV / Channel 4, one smaller channel (TV Tokyo) like Channel 5 and a strong ads-free PSB (NHK) similar in model to the BBC. These 5 commercial broadcasters cover the Kanto region (Tokyo and surrounding 6 prefectures) equating to approximately 20M households out of 57M in total and its affiliated network channels cover the rest. Therefore there is a strong concentration of market value in the capital. (see diagram 2 for a comparison of UK and Japan markets).

Like many developed markets, TV is more popular amongst the older demographic but it still enjoys a realtively strong position in terms of share of ad budget. The diagram below shows the relative sizes of the TV and digital ad revenues between Japan and the UK. 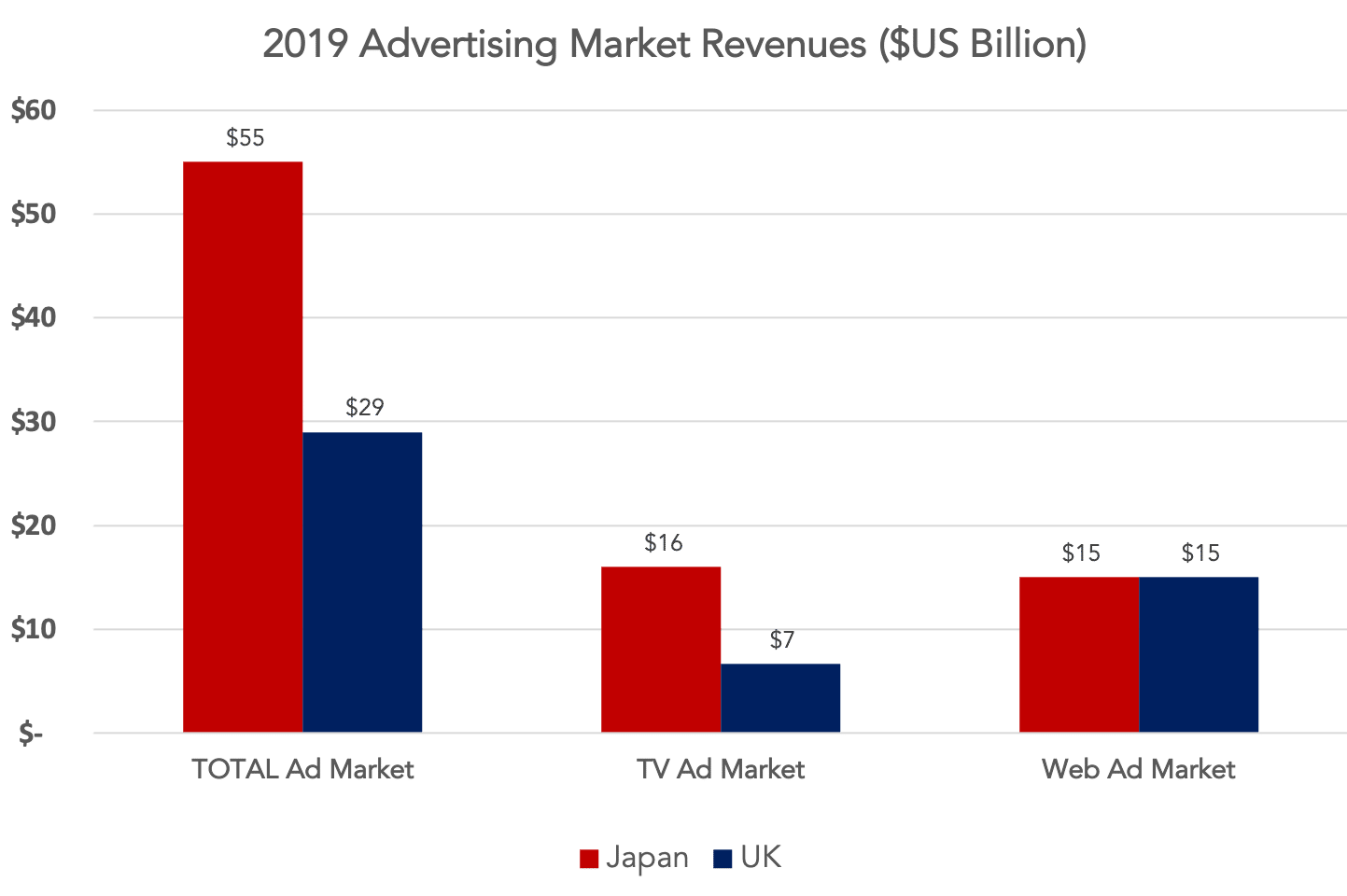 
In digital, we see a mix of American and local Japanese players, where YouTube dominates with close to 60 million MAUs through its mix of legal and illegal content, followed by AbemaTV, Amazon Prime, Gyao and TVer providing premium content. Similar to the UK, the consumers now have a substantial number of choices to watch their content.

The diagram below shows the top 7 streaming services by popularity and also provides some background on each of the services. What is noteworthy is that Netflix falls out of the top providers and there are a further handful of local services  as well. 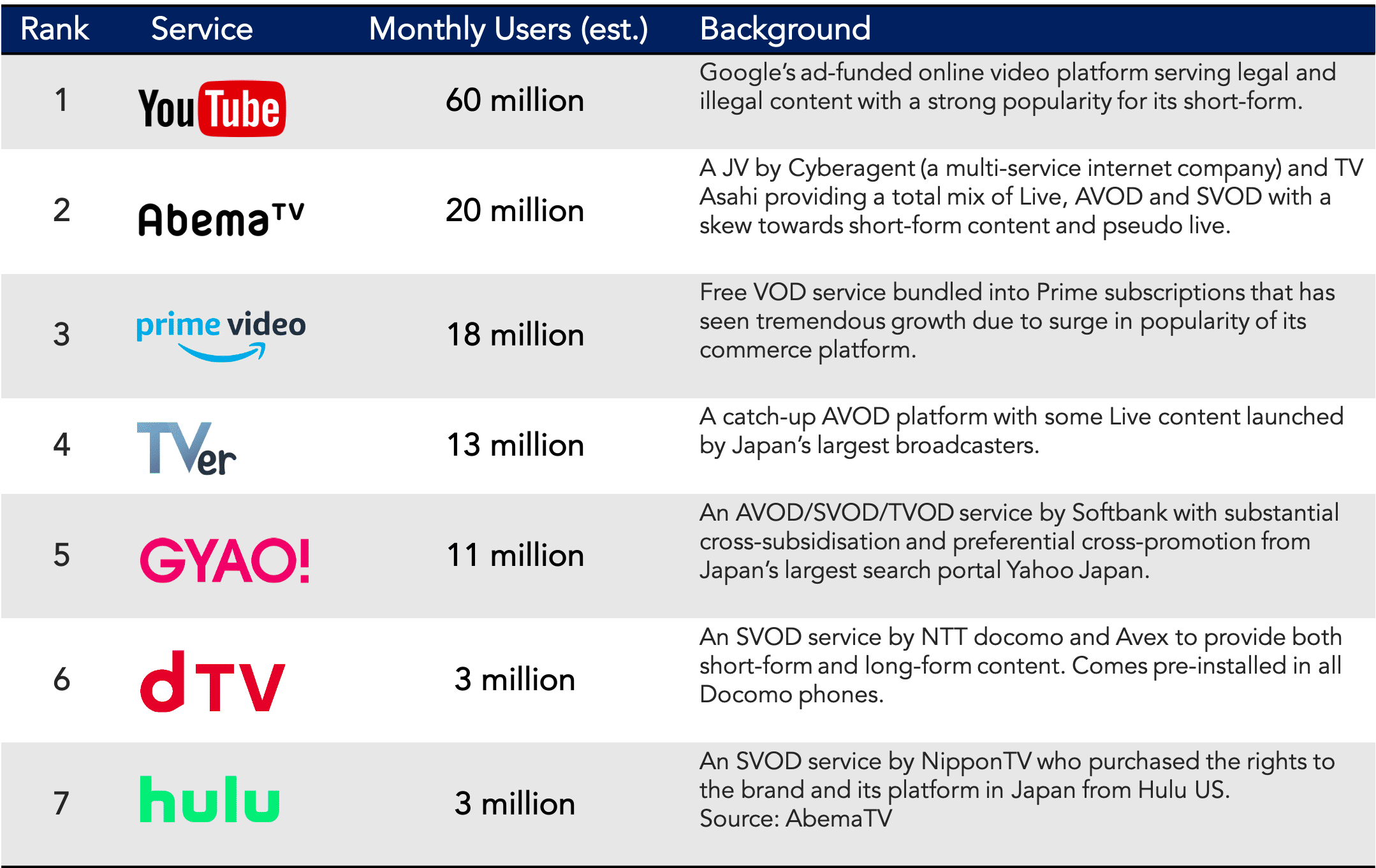 In the early 2000s Japan was at the forefront of mobile business with walled-garden services like NTT Docomo’s “i-mode”, that gave TV stations additional revenues for simulcasts. But after the launch of the iPhone, this collaborative model collapsed, and TV’s “mobile” revenues subsequently diminished as new video apps and digital advertising platforms became the dominant model.

It was in this period that broadcasters also realized another major issue that TV CPMs had remained unchanged for many decades due to relatively static innovation in the space and the unique position of mega-agencies in Japan. The broadcasters found themselves nestled between an agency-driven TV market and a surging digital market dominated by foreign companies.

With little prospect of growth in their own services, the top 5 broadcasters began discussing the strategy of a common platform for their catch-up services in spite of being in fierce competition for TV ratings. The imperative was for broadcasters to have more end-to-end control by building their online audiences directly and managing their online inventory. This was the birth of TVer.

TVer’s YoY growth since its launch in October 2015 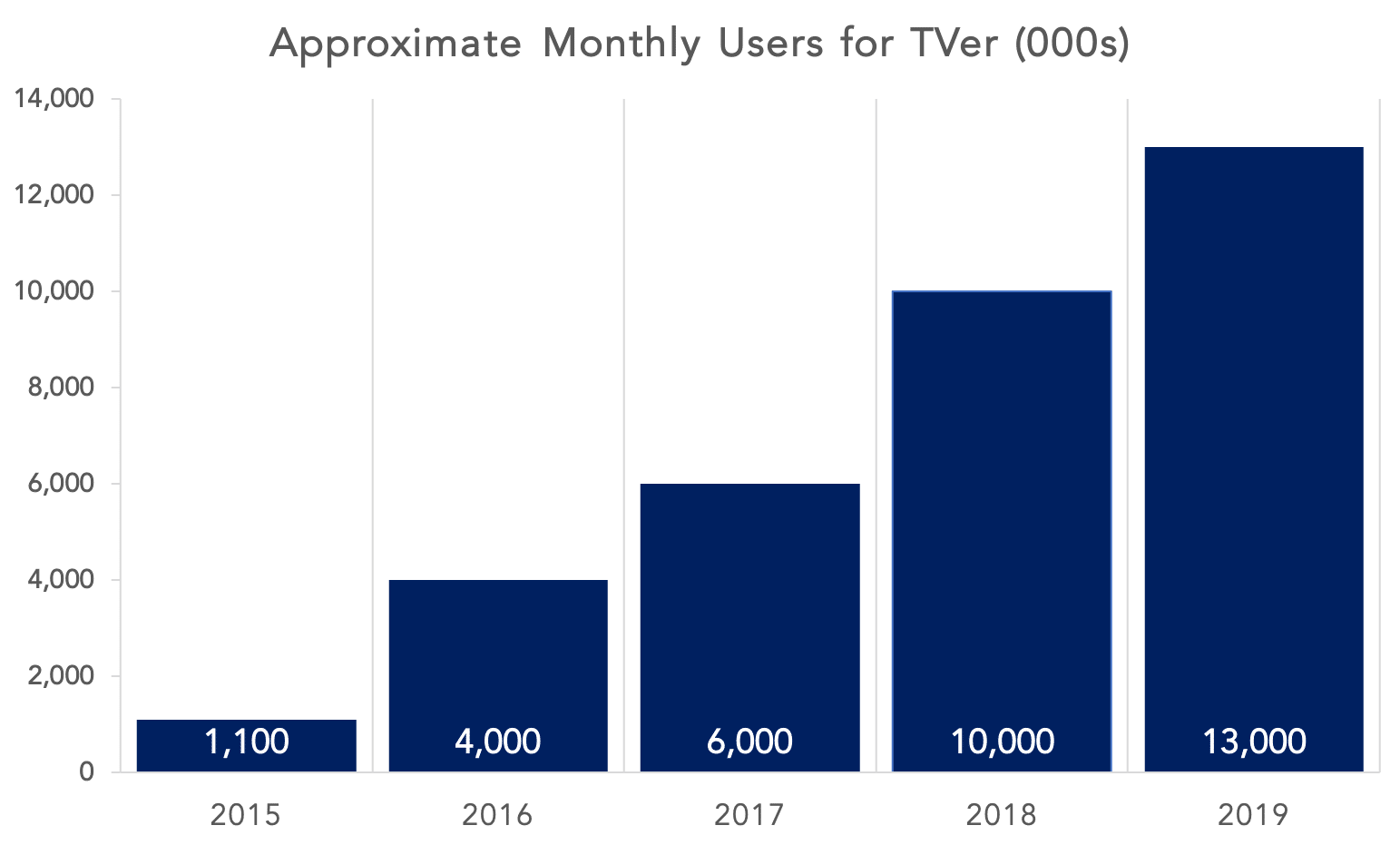 TBS led the project at the onset, building the necessary consensus and models of this new alliance platform bringing it to launch in October 2015. A web agency called Presentcast was given the responsibility as the independent party to provide basic operations of the platform and mediate the technologies together.

The ensuing success of TVer to circa 10 million MAUs in 2019, accelerated confidence and better communication between broadcasters with over 13 now having joined the platform to provide a wealth of premium catch-up content. Below are some key stats to show its relative but ascending position in the Japanese market.

TVer’s monthly active utilisation and downloads has been growing as its brand increases in awareness amongst the population of 12-69 years olds. TVer and Amazon Prime have been the two quickest growing premium video services, eroding some share away from YouTube. 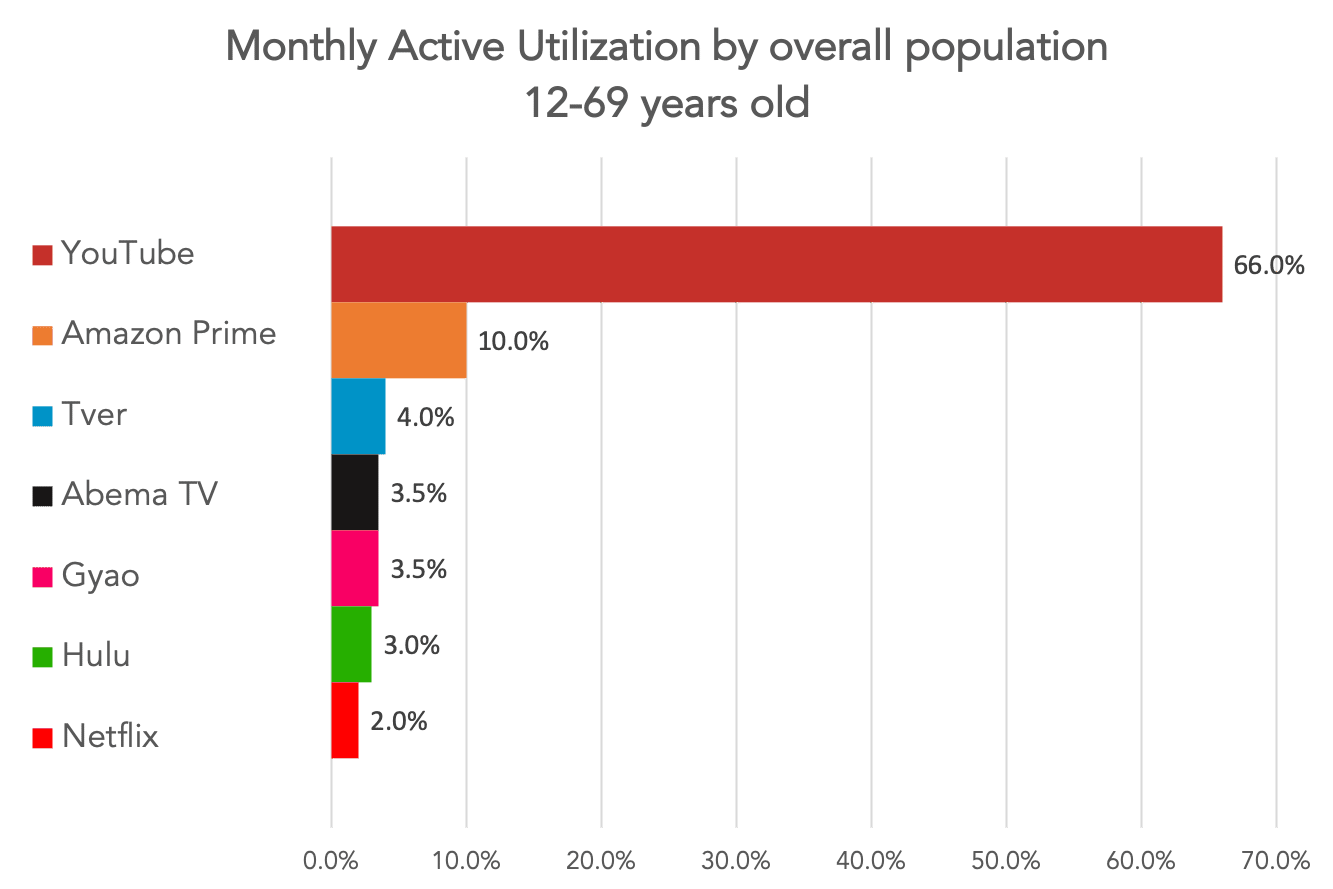 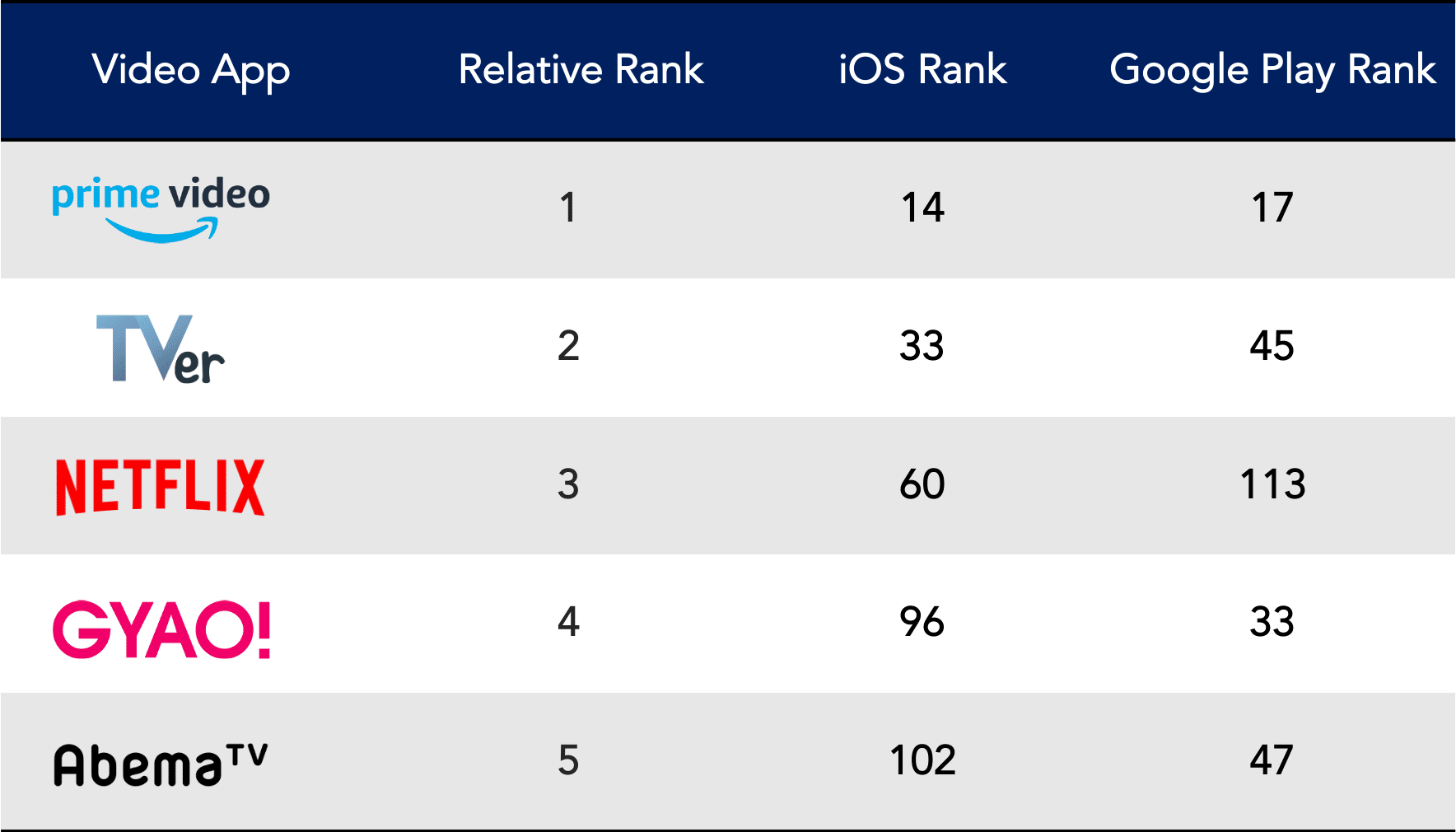 A view from the inside on the inception of TVer: Interview with Hirosuke Usui from TBS

Q1: Could you explain how TVer settled on its current operational and business model?

A: Launching TVer was somewhat reminiscent of Project Kangaroo in the UK or Pooq in Korea. We took a good look at what had worked or failed in the UK and US markets and picked the best fit elements for us. One key decision was rather than relying on a separate stand alone entity, the goal was to retain control by the commercial broadcasters in regards to content selection and ad sales making it an extension of everyday business.

We also made cost-conscious decisions with technology partners trying not to reinvent the wheel and set up governance to keep a level of transparency between the channels.

Q2: It’s a big year for Japan with the Olympics on the horizon. What is the outlook for linear streaming audiences during this time? And will it be monetised any differently?

A: The different sports events are sure to be streamed by many different broadcasters and it is likely to be popular . However at the moment, none of the said broadcasters are providing simulcast streaming of their channels yet so it is unfortunately unlikely to have a new monetisation model this year. We are considering to offer the Olympic live streams on the broadcasters’ sites as well as TVer.

Q3: We now know of the remarkable growth of your audience from zero to circa 10 million MAUs. Can you share how data is playing a role in this growth and how TVer operates commercially?

A: TVer was built for retaining TV lovers in the online world. I personally think we just finished the very first stage. There will be a lot of potential from utilizing its data, creating new markets not just online but also in broadcasting. Ultimately, we would like to raise TV ad prices if the online inventories are originated in TV shows.

For better usage of TVer, audiences may choose to provide their age, gender and postcode. This data is being used to inform Editorial and Marketing, as well as providing the backbone of targeted ad sales packages for Advertisers. Importantly, there was a big project to unify the userID system across TVer and the broadcasters in order to provide consistency and reliability. We are now exploring new approaches including our initiative with data technology vendors (such as Streamhub and VideoResearch) to build better capabilities and value to our advertisers.

Q4: Speaking of advertising, there has been growing expectations in Europe over HbbTV as a technology to deliver next generation measurement and television ads. In Japan we hear there is something similar called HybridCast. Is there going to be any collaborative involvement in this area as well for TVer products?

A: Some broadcasters did an experimental technology trial by using datacasting function of ISDB-t (Japan’s digital terrestrial broadcasting). But this has not yet included any advertising initiatives and we are still exploring how it could support TVer.

Q5:What other online VOD services do the broadcasters offer and how are they relevant to TVer?

A: Each of Tokyo’s broadcasters have their own pay VOD service. Japan has a strong high-quality local production combined with a high penetration of FTA television, leading to a strong culture of free viewing. As such, it is one of the toughest markets for SVOD platforms. I personally predict there will be an expectation to integrate TVer and those SVOD services at some point, so viewers will have more freedom to enjoy more TV shows regardless of it being catch-up or SVOD.

Q6: In the UK, more and more audiences young and old are using the TV but to watch VOD content rather than time bound linear schedules. Is there a similar trend with TVer?

A: Actually there was a desire by the broadcasters to get younger viewers back to using TV sets rather than just spending time on their mobiles to watch content.

To that end, last year TVer launched its smart TV apps but it does not yet have any integration into the TV set’s EPG. This Integration is being worked on at the moment.

We do not know how fast the trend will extend in Japan’s market, but our goal is to retain this linear business as profitable as ever at this moment as we continue to grow digital.

Q7: What are the next challenges to TVer’s further growth?

A: We want to continue building the traditional AVOD TV experience and its strong content online. From the TV audience’s point-of-view, it is ideal if they could access NHK content on TVer, so that it can recreate the TV-like environment online. However NHK only places very few shows, as they are trying to prioritise the simulcast stream of their own channels. However in my opinion, we do not need to rush to build out 24/7 simulcast streaming products, since audiences mostly enjoy VOD viewing and there is no clear definition yet on how to monetise the simulcast streams in terms of advertising.

Hirosuke Usui joined Tokyo Broadcasting System, Inc. in 1986 as a broadcast engineer. He subsequently enjoyed responsibilities in event project development, programme production, international programme sales and also moved to New York as VP of TBS International in 2004. Later, in 2008, he was appointed as Director of the Digital Content Production Department, where he built expertise in digital and monetization, also serving as an advisory board member of “AdTech Tokyo” through to 2013.

In recent years, he was appointed as VP of the President’s Office and also served as the Director of International Affairs until 2017. In his current role, he has been given the mission of how to make TV great again in the new era of a rapidly changing technological and economical landscape. 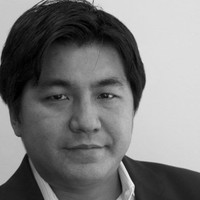 A TV / OTT innovator, Aki’s foundations in the content business were built at Viacom together with the executive teams who launched MTV in Japan and other Asian markets. He subsequently joined the Skype founders to build Joost in 2006 – pioneering online TV products, strategies, and business operations now widely adopted by the industry. As CEO of Streamhub, Aki oversees the evolution of the SaaS product and business operations.

We use cookies to ensure that we give you the best experience on our website. If you continue to use this site we will assume that you are happy with it.OkPrivacy policy